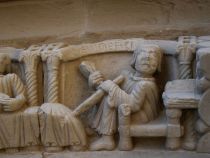 The term FECIT usually appears in captions that function as a “signature”. The most common derive form of the term in the High Middle Ages is X FECIT. Another derive form of the term is X ME FECIT which was first developed in the Greco-Roman period and commonly used from the 11th century forwards. It is worth mentioning that sometimes X FECIT refers implicitly the patron (vid. FIERI IVSSIT), which turns it into an ambiguous caption. The finest example is Abbot Oliba who presented himself as the “auctor” of the basilica of Santa Maria of Ripoll, which was consecrated by him in 1032. While consecrating this basilica Oliba ordered to inscribe his name within the entrance of the new temple: VIRGINIS HANC AVLAM SACRAVIT OLIVA BEATAM/ HEC DOMVS EST SANCTA QVAM FECIT DOMNVS OLIVA/ + + COELITVS ACCENSVS DIVINI NVMINIS IGNE («Oliba consecrated this holy temple of the Virgin/ This is the holy house that Oliba ordered to be made/ Enkindled from Heaven by the flames of God’s Will»), (Barcelona, ACA, Ms. 46, f. 21r).

Epigraphically, this is an unusual form and it rarely refers the form X ME FECIT. Consistently, the two epigraphic forms start with a name, which is sometimes followed by an adjective qualifying the name as FABER / PINTOR / SCVLPTOR / VITREARIVS / ARTIFEX, etc. Similarly, this form includes the term MAGISTER repetitively. On the other hand, the artist’ work could be also mentioned. Yet, this form does not restrict itself to giving the floor to the artist or to the short mention, but to an extended form as X FECIT HOC / OPVS / or / ISTAM PORTAM / CIBORIVM, etc.

It is also not uncommon for the artist “signature” to be followed by a pious form, an account with memorial or advertising values and even an earlier expression of corporate pride. On the other hand, this forms are usually altered by replacing the term FECIT by the terms FABRICAVIT / SCVLPSIT / PINXIT... Further to the carvers, these forms usually provide some personal data that avoids significant details about them whereas at the same time they inform us about the carver’s gender or as to whether the carver was a layperson or a religious man. As a result, the terms PRESBITER / MONACVS... refer undoubtedly to the carver status and the term PECCATRIX informs us about the carver’s gender. Normally, religious men mention the houses to where they belong whereas laypeople usually mention their home city. Sometimes, these forms mention two or three artist’s names.  Occasionally, they mention them hierarchically or specify those artists’ pieces of work.

In Medieval European Art there are hundreds or thousands of “signatures” with this type of epigraph. Taking into account the many “signatures” that were part of pictorial and sculpted sets and are currently erased or missing, it could be presumed that there were many more “signatures”. Their number is particularly impressive in the case of Romanesque Art. Nevertheless, the signatures are not so commonly found due to their location and geographical distribution. On the other hand, these signatures do not necessarily belong to accomplished and acknowledged artists but they appear in poorly crafted works and some other highly crafted works lack the signature. Some of the signatures are placed in a privileged spot in order for a large audience to see them, whereas sometimes the signatures were more unnoticeable and avoided this requirement. Despite the fact that these signatures are currently associated to each media, initially they were mostly associated to goldsmithery work and objects made with precious metals. Most “signatures” are to be found in architectural sculpture, even though it is possible to find them in every media.

It is worth mentioning the following examples as the finest ones, which have been chosen because of their Hispanic or Catalan provenance:

In the absence of further information, it is often highly difficult to interpret a “signature” that belongs to an sculpture since it could refer the sculptor, the workshop or even the master builder. Nevertheless, in some cases, there is not such ambiguity, especially when talking about objects. It is nonetheless true that the signatures, whatever form they adopt, are generally short in details and information about its carver/ carvers’ occupation. On the contrary, beyond their commemorative and advertising values, these signatures often express an undoubtedly complacency or even an actual pride for the word that has been made. One only has to bear in mind the way the goldsmith Almanius, who is the maker of the golden altar frontal donated by king García Sánchez III of Navarre (1035-1054), Sancho III el Mayor of Navarre’s son, and his wife Estefanía to the monastery of Santa María la Real de Nájera, defined himself: ALMANII DECVS ARTIFICIS VENERANDI (...made «by the venerated artist Almanius»). Nevertheless, the finest examples in this media are to be found in Northern Italy. Sculptors will to differentiate themselves from stonemasons was exacerbated by an increased competition. At all events, most of the “signatures” are to be seen as an expression of complacency for a job well done, as much as their pursuing of social acknowledge,  which is often intensified by placing their signatures in a privileged spot.

Most “signatures” are carved or painted carefully and valued due to their location in close proximity to other “signatures”. Some other “signatures” belong to the group of quite illegible graffiti. In the first case it is worth noting that further to the South Portal of Santa María la Real de Sangüesa, Leodegarius carved his name beneath the Virgin’s name, upon the open pages of the book hold by Mary. In the case of San Lázaro de Autun, the sculptor Gislebertus placed his signature beneath the feet of Christ, in the famous portal… Occasionally, artists carve their portrait aside their name. This is the case of the sculptor Michaelis who portrayed himself as carving with his tools under the arcade where his signature is placed (MICAELIS ME FECIT), just on the beginning of the second archivolt of the main portal in the church of Revilla de Santullán. Further to Arnau Cadell (San Cugat del Vallès), not only he completed his signature (HEC EST ARNALLI SCVLPTORIS FORMA CATELLI QUI CLAVSTRVM TALE CONSTRVXIT PERPETVALE / This is the effigy of the sculptor Arnau Cadell, who built this cloister for posterity) with an inscription that recorded him as the maker of the decoration of a perpetual cloister, but he also portrayed himself working in the next capital.